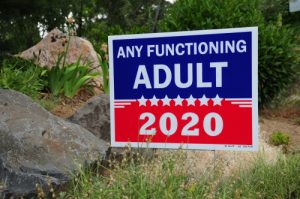 This is your biennial public service announcement. Do not adjust your portfolio based on how you expect the November elections to turn out. I have seen multiple studies over the years that show returns are nearly identical with Republican and Democratic presidents. Some studies even break things down into combinations of who controls the houses of Congress and the Presidency. There is no discernable pattern.

I know that’s not how it feels. Today’s hyper-partisan world has many of us feeling like elections are life and death decisions. If our party loses, things will be terrible. Naturally, this will lead to a horrible economy, among other things. We may move to Canada…if they reopen the borders.

The facts tell a different story. The president has very little control over the economy or the stock market. Look at the last three big U.S. stock market crashes. The tech crash was the result of a bubble. The great recession was caused by a combination of overleveraged banks and poor housing policies (among other things). Government played a role, but both parties were to blame. Our current crisis is due to a pandemic. None were caused by the president.

The President of the United States is an important job. Continue to be passionate about whom you want to hold that position. Leave your investment strategy out of it though. The two don’t mix well.